I had a chance to visit with a couple of guys  who are passionate about making sure our nation does not forget the men and women who fought in the Korean war. 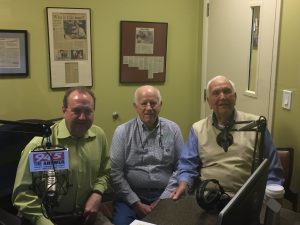 The Korean War was a fight against Communism in the early years of the Cold War. South Korea was at risk of being taken over by the Communist North Korea until America led the United Nations forces in halting the advance of North Korea armies into South Korea.

Over three years after it began, the Democratic forces succeeded in keeping North Korea at bay, but this victory did not come without its sacrifices. More than 37,000 men and women lost their lives, and more than 103,000 were wounded while defending South Korea, ad we still have nearly 8,000 KIA’s/MIA’s over there since the North Korean and Chinese regimes will not let us in to find them and bring them home.

Now, America is finally poised to pay tribute to these 37,000-plus heroes. Congress enacted legislation last year that was signed by President Obama that would allow the construction of a “Wall of Remembrance” at the site of the Korean War Memorial in D.C. The wall will have the names of all the American KIA’s/POW’s engraved in it, however, no federal funds can be used in the construction.

That is why your help is needed. The Korean War Veterans Association Foothills Chapter #301 here in Greenville is taking on the task of raising the funds for Greenville’s KIA’s/POW’s, which is about 55. They have set a goal of $20,000. The approximate cost for each name on the wall is $350. They have launched a statewide campaign to raise the money to cover all the names from South Carolina.

Many of our brave soldiers gave all during this war. Let’s do our part and give some. All donations are tax deductible, so those who can afford it, please “sponsor” one name by giving $350.00, but contributions of any amount are appreciated.

Make your checks payable to: KWVA Foothills Chapter #301. In the “For” area of your check, please write “Wall of Remembrance,” and mail all checks to Lewis Vaughn, 623 Ashley Commons Ct., Greer, SC 29651.

You can listen to the interview here if you missed the show.